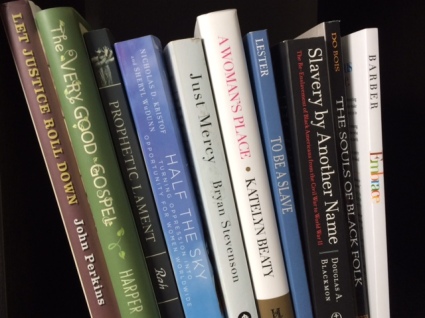 Have you seen it? #bearingwitness has emerged recently as a short-handed way of identifying moments of injustice against people (at least before a vegan movement to save pigs took on the hashtag). Whether in response to the U.S. President-elect’s tweets, to the recent mistrial in the case against the officer who killed Walter Scott, or to the treatment of Native Peoples protesting the Dakota Access Pipeline, this hashtag has become a convenient way for allies to bear witness about current injustices, particularly against those entangled in poverty and suffering from racism.

The role of an ally is to turn public attention toward those marginalized, harmed, and killed by uses of power that encourage, enact, or enforce discrimination in ways that dehumanize others based on their racial, national, religious, economic, gender, or some other identity. While certainly more multi-faceted than hashtags, likes, and retweets, the public side of bearing witness, at minimum, involves utilizing cultural privileges to create room for those who have been mistreated to tell their own stories.

However, as much as the public-facing engagement of allies is necessary for effecting cultural and systemic change, an ally’s primary posture is formed outside of the public’s attention. I am learning, as a white man with ridiculous amount of privilege, that the primary posture of any ally is to listen.

Listening is primary and not merely the first of many activities because those harmed by injustice – their realities, their stories, their voices – remains as the central focus of an ally’s attention. While additional acts of solidarity are necessary and beneficial for addressing systemic and cultural discrimination, no act can be considered “in solidarity” if it is not rooted in and nourished by an ally’s posture of continual listening.

Allies also listen as an act of defiance, subverting the cultural norms that rank the value and trustworthiness of a person’s story according to their communal identity. In listening as an ally, I am advancing a vision of human worth that runs contrary to the discriminatory abuses so pervasive within the systems and structures of North American society.

As I’ve been learning to listen, I am discovering that my cultural advantages frequently afford me the privilege of being sheltered from other peoples’ suffering. As I listen, I recognize more of my own complicity in systems and cultural values that have harmed others. In this light, part of my responsibility as an ally is to broaden and deepen my listening.

One way I am learning to listen well is through reading. Today I started reading The Collected Poems of Langston Hughes. One of the poems that caught me short is Hughes’ poem “Justice.” He writes:

That Justice is a blind goddess/ Is a thing to which we black are wise./ Her bandage hides two festering sores/ That once perhaps were eyes.

The poem reminds me of Bryan Stevenson’s powerful book Just Mercy, detailing the injustices within the criminal court systems, particularly with regard to persons of color, with southern states, and with death row sentencing. Hughes and Stevenson testify that the justice system is not as just as its name would suggest.

As one who has been raised to trust the courts to work in favor of the innocent, I realize I have much to learn about how others, particularly people of color and those in poverty, experience law enforcement and sentencing. What I would like to assume about the courts is not the reality that others are experiencing.

Admittedly this example is not the first time I’ve encountered the theme of unjust judicial systems. However, the practice of reading broadly in order to listen well is a newer step for me in the process of becoming an ally. And as a I read, I am starting to recognize just how critical reading is as an act of bearing witness.